The tuscan organic agricoltural holding “Gabriele Mazzeschi” , a family business, is been founded in 1860 and it’s now run by Gabriele Mazzeschi after 4 generations. The farm is made up of 100 hectares of olive groves and vineyards.

The farm is organic certified. On the farm, there are about 5000 olive trees grown on a gravely ground in the tuscan hills, at an altitude of 350-450 metres above the sea level.
The olive trees are planted on terraces and there are the typical tuscan varieties of Frantoio, Moraiolo and Leccino. Olives are picked by hand, crusched within 6 hours from picking and the extra vergin olive oil is filtered immediately after the crushing. The mill where the oil is extracted is one of the best in Tuscany because of the advanced machineries. Theese precautions are fundamental to obtain an high chemical and organoleptic quality to the tuscan extra vergin olive oil “Le Capanne”.
The extra vergin olive oil “Le Capanne” is been rewarded several times by Gambero Rosso with “Tre Foglie”, the higher score, and a 90/100 score in the International guide “Flos Olei” for the 2016 and 2017 editions.

In the vineyards are cultivated typical tuscan grapes: Sangiovese and Syrah for the production of red wines, Trebbiano and Malvasia for the production of white wines.
The wine making process takes place in the owned cellar where are producted four different wines:
– White wine IGP Tuscany “Mezzavia”, 75% Trebbiano and 25% Malvasia;
– Rosè wine IGP Tuscany “Primo” IGP, 100% Sangiovese;
– Red wine IGP Tuscany “Foramacchie”, 95% Sangiovese and 5% Cabernet-Sauvignon;
– Red wine IGP Tuscany “Commendatore”, 100% Syrah;
Every wine’s name it’s been choosed for family reasons or because of the areawhere the vineyard is.
“Commendatore” is the most important wine, not only for the winery, but for the family too because it’s been made in honor of the farm’s founder Michele Giusti who obtained that destinction in 1974. Also the agricultural holding’s brand is a way to remember the founder because it rapresents his name’s initials. By chance, the current owner and Michele Giusti’s nephew, Gabriele Mazzeschi, has the same initials too.
“Foramacchie” was Gabriele’s grand-father’s nickname. In fact it stands for “forare la macchia” which, in the local language, means lumberjack, that was its job.
The two red wines are been reviewed by James Suckling, one of the most influent american wine critic, with a 91 and 92 score fro both vintages 2015 and 2016.

Wine and oil making is not the only passion for the family. In fact, every year, the winery host in the cellar rooms an art exhibition called “Arte e Vino” where one of the greater italian artists is selected all over the country. 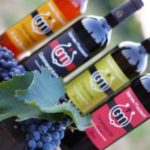 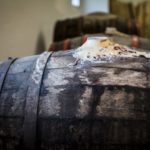 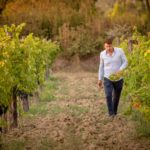